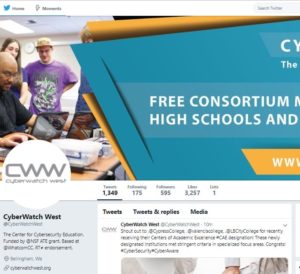 CyberWatch West used Twitter to communicate with its membership and the public about events, opportunities, and news items related to cybersecurity education and workforce development. Goals for the Twitter account include raising awareness of the consortium among U.S. cybersecurity educators and students; attracting new member schools; and increasing member participation in the consortium’s programs.

During the more than two years I managed social media efforts, the reach of CyberWatch West’s messaging on Twitter increased. The number of voluntary subscribers (“Followers”) of the Twitter feed more than doubled in two years, from approximately 200 in April 2016 to 552 in April 2018.

Since I left Bellingham and my role at Whatcom Community College in 2018, CyberWatch West has been renamed the National Cybersecurity Training & Education Center (NCyTE Center), and its Twitter account has been rebranded as the NCyTE Center account.